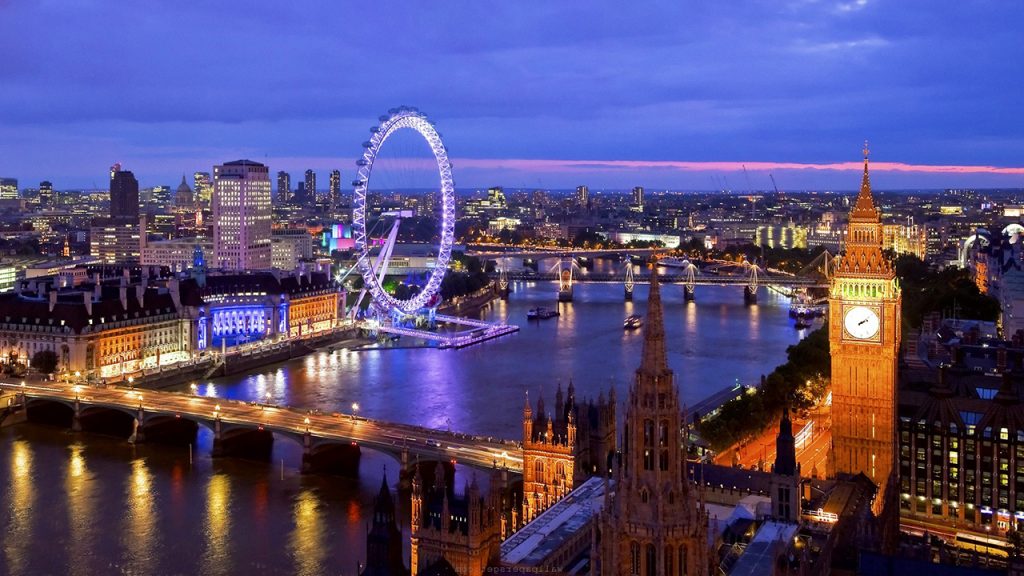 The English capital has so much to offer. From a plethora of museums, art galleries, theatres and famous shopping haunts, it is home to a hustle and bustle like no other. The fevered multiculturalism of London has created several distinct districts, each containing unique sights and experiences.

Many of London’s key sights and landmarks can be found along the River Thames: Big Ben and the Houses of Parliament are in the heart of Westminster, the Coca-Cola London Eye, sits on the South Bank. The iconic St Paul’s Cathedral designed by Sir Christopher Wren is located across the river from the Tate Modern on the North Embankment. London’s tallest skyscaper, The Shard, is at London Bridge, also home to Borough Market, one of the capitals most renowned food & drink markets. Tower Bridge, perhaps London’s most iconic, is located next to the Tower of London in Tower Hill.

Traditional and royal London can be found in Westminster, which is home to Buckingham Palace, Clarence House and the Royal Parks – St James’ Park, Green Park and Hyde Park. Central London contains world famous shopping streets – such as the famous Oxford Street – bars and clubs, while South Kensington in West London is the city’s cultural epicentre. East London areas such as Shoreditch and Dalston are known as London’s creative hub, with colourful street art, eclectic street food, quirky shops and great watering holes.

Your programme can be enhanced by a wide choice of London hotels in various locations and categories. Our selected hotels are located near good transport links making sightseeing for your groups a breeze. The range of accommodation varies from quality controlled youth hostels to superior mid-class hotels with more traditional or contemporary styles of décor.

There is no need to worry about where to stay in London for the best sightseeing because we’ve got it covered.

Eat your way through London on this five day tour, which reflects London’s reputation as a melting-pot and home to multicultural delicacies. Experience a variety of cuisines from traditional fish and chips in an English pub and to international street food at two famous London markets.

– Arrive at the airport and Check-in at the hotel

– Free walking tour around the hotel

The day starts with a sightseeing tour of central London, covering the most famous sights. Enjoy lunch in Covent Garden, the former fruit and vegetable market, which is known today for its numerous cafes and pubs. Next, visit Fuller’s Brewery, one of the oldest and most famous in London. In the evening enjoy delicious fish and chips in a traditional pub.

Pass by the Tate Modern and Shakespeare’s Globe theatre on a stroll along the River Thames. Visit Borough Market, a foodie paradise serving local and international specialities, as well as street food that is perfect for lunch. During free time in the afternoon, take the chance to discover Chinatown for more delicious treats, and have an Asian meal at one of the numerous restaurants.

Visit the ‘City of London’ which is home to the impressive Bank of England, as well as numerous futuristic skyscrapers. Next wander round the nearby Spitalfields Market which is filled with an eclectic mix of stalls, cafes and delicatessens. Afterwards explore Brick Lane, an area famous for its offering of international street food, and long stretch of curry houses, better known as curry mile. In the evening enjoy a farewell dinner at Jamie’s Italian, a restaurant founded by the famous chef, Jamie Oliver.

Check out from the hotel, then get to the airport for the flight

Amba Hotel Marble Arch – a unique hotel that’s the perfect destination whether you’re on a business trip or simply experiencing London and its many charms.
With outstanding modern, facilities and features, as well as comfortable, modern rooms and expert staff, we’re sure you’ll enjoy your time at one of the best hotels near Oxford Street

As a four-star hotel, you can expect absolute comfort and impeccable service during your stay. You’ll find yourself just a stone’s throw from shopping hotspots such as Oxford Street and Mayfair, as well as a host of famous London landmarks including Madame Tussauds and Hamleys. Once you return, relax and enjoy a delicious meal in our fabulous restaurants or bars.

Get in touch with our expert team today and discover an outstanding Oxford Street hotel experience.